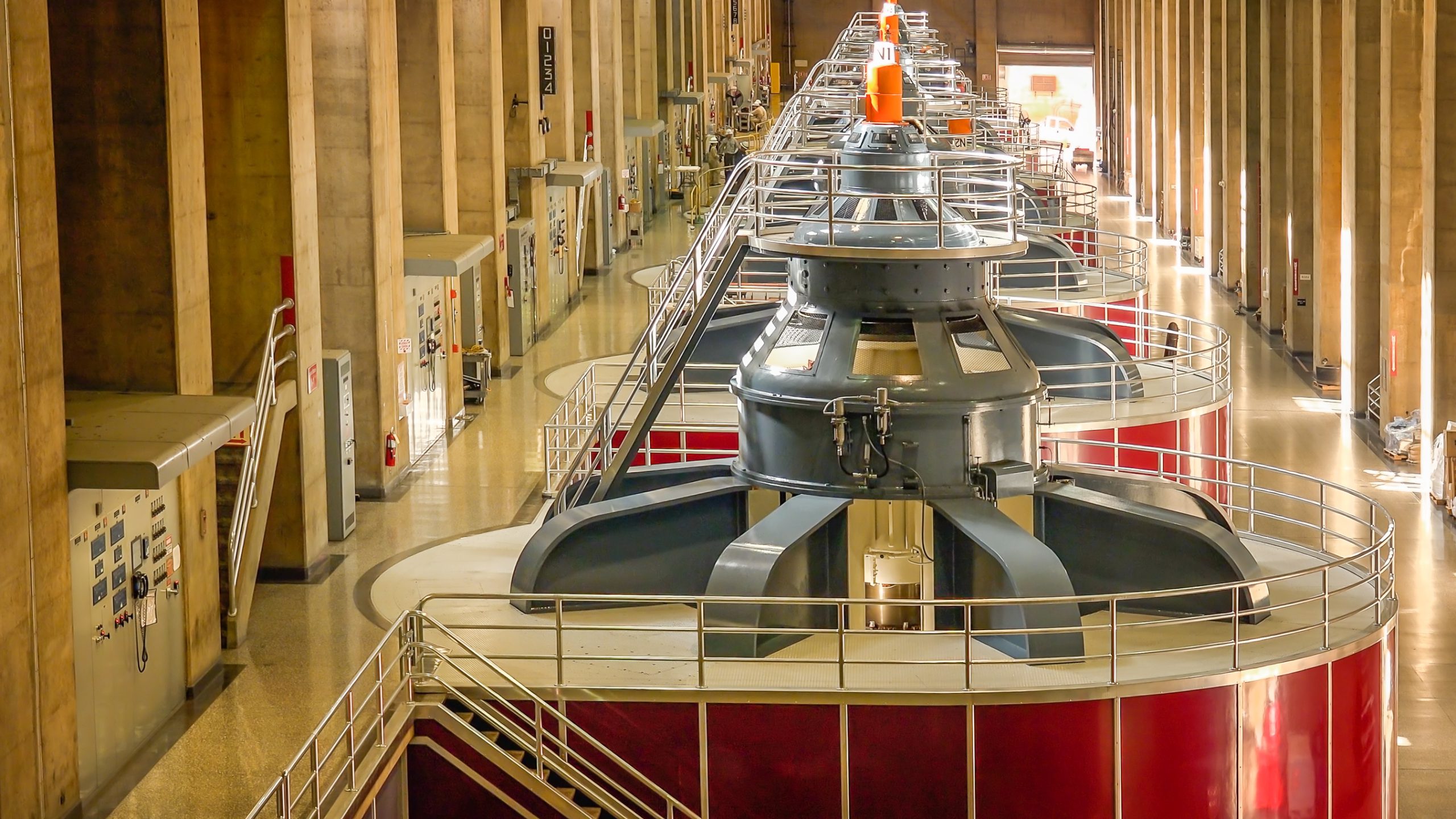 In this 2-part series, we are examining the pros and cons of various sensors used for making low-frequency measurements. Although the hydro power sector is one of the most common industries where such measurements are required, it is by no means the only industry where such applications are found. The pulp & paper, metal, mining, cement, water treatment, and petrochemical sectors also find applications where low-frequency measurements are necessary such as on rolls, mills, rotary kilns, agitators, pelletizers, extruders, and other slow-speed machinery.

In part 1, we focused on the physics of low-frequency measurements, allowing a better understanding of why some sensors are inherently more sensitive than others and why simply mathematical integration of a signal does not automatically mean that an accelerometer is the right choice for any and all applications. In part 2, we now turn our attention to other aspects of sensor selection and why sensitivity alone is rarely the sole selection criteria.

In part 1, we used the vibration nomograph to show that for a given frequency of excitation, there is a fixed relationship between displacement, velocity, and acceleration such that extremely low frequencies generate large displacements, moderate velocity levels, and very small acceleration levels. We also showed that the signal from a moving-coil velocity sensor at such frequencies is quite strong relative to the output from an accelerometer precisely because the velocity is much greater than the acceleration.

We concluded part 1 by stating that selecting a sensor based solely on its sensitivity was only part of the necessary evaluation; there were also other factors to consider. These factors include sensor reliability, sensor cost, and whether velocity is truly required or if displacement or acceleration are actually the measurements of interest.

The direct measurement of casing displacement vibration with a sensor that has a native displacement output entails use of a proximity probe rigidly mounted so that it does not move relative to free space and observing a suitable target on the vibrating surface. While this is easy enough to describe verbally, it is often impractical for machinery. It is almost always easier to use a seismic sensor and then integrate the signal to displacement. Such vibration measurements are very typical on hydro turbine generators where it is usually necessary to measure not only shaft-relative vibration at each bearing but also seismic vibration of the bearing caps. It is also typical to monitor stator frame vibration in both the radial and axial directions and sometimes even to measure the support structure vibration to ensure looseness or other problems are not occurring. 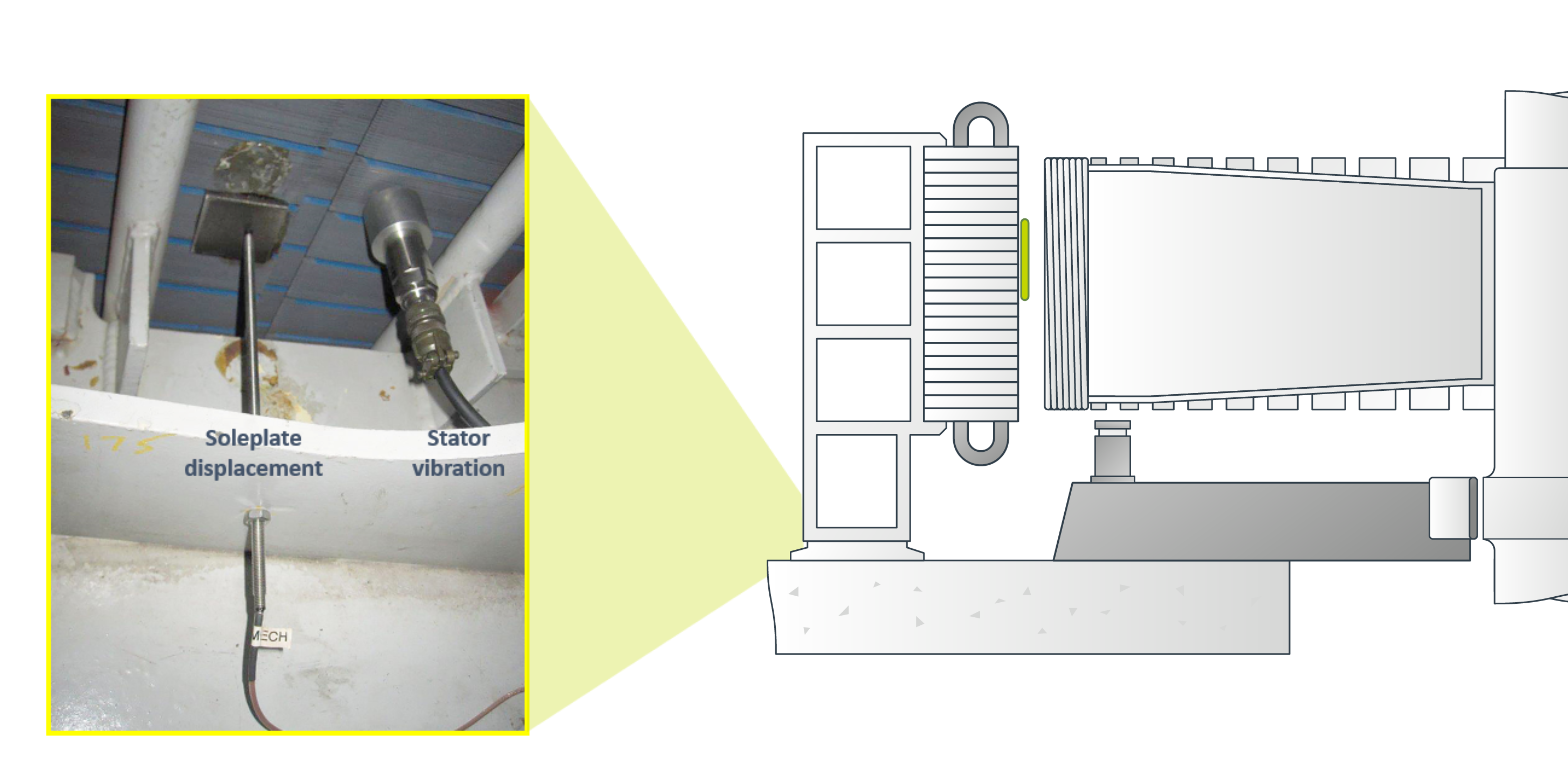 Soleplate displacement is another common measurement. However, it is fundamentally a position measurement – not vibration.

Seismic sensors are often used for casing vibration measurements rather than proximity sensors due to the complications in mounting the sensor on a structure that is truly motionless rather than vibrating since absolute (relative to free space) casing vibration is almost always desired rather than the relative vibration between the casing and the mounting surface. When a seismic sensor is used, it is usually one that provides a velocity output, whether native velocity from a moving-coil device (such as the vibrometer VE210) or integrated acceleration from a so-called “piezo velocity” device (such as the vibrometer PV660). 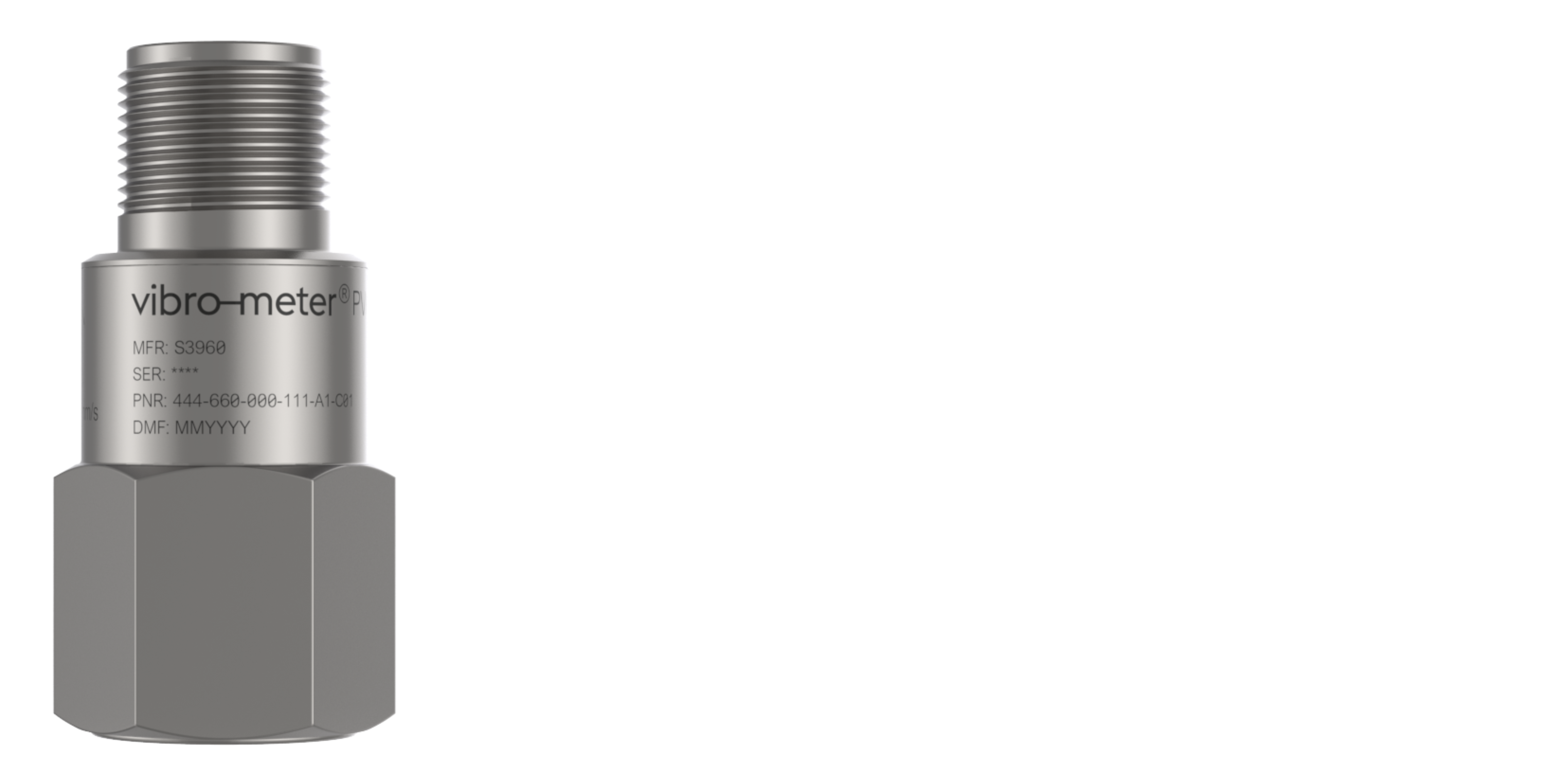 The vibrometer PV660 is fundamentally a piezo-electric accelerometer with an internal integration stage to produce a velocity output. It has a frequency response down to 1.9 Hz (114 cpm) and an output sensitivity of 4mV/mm/sec.

When casing vibration measurements are required – whether on slow-speed machines or higher-speed machines – seismic sensors are almost always used as discussed in the previous section. Thus, the selection of a sensor for casing measurements is rarely about proximity versus seismic – it is instead about moving-coil versus piezo technology. 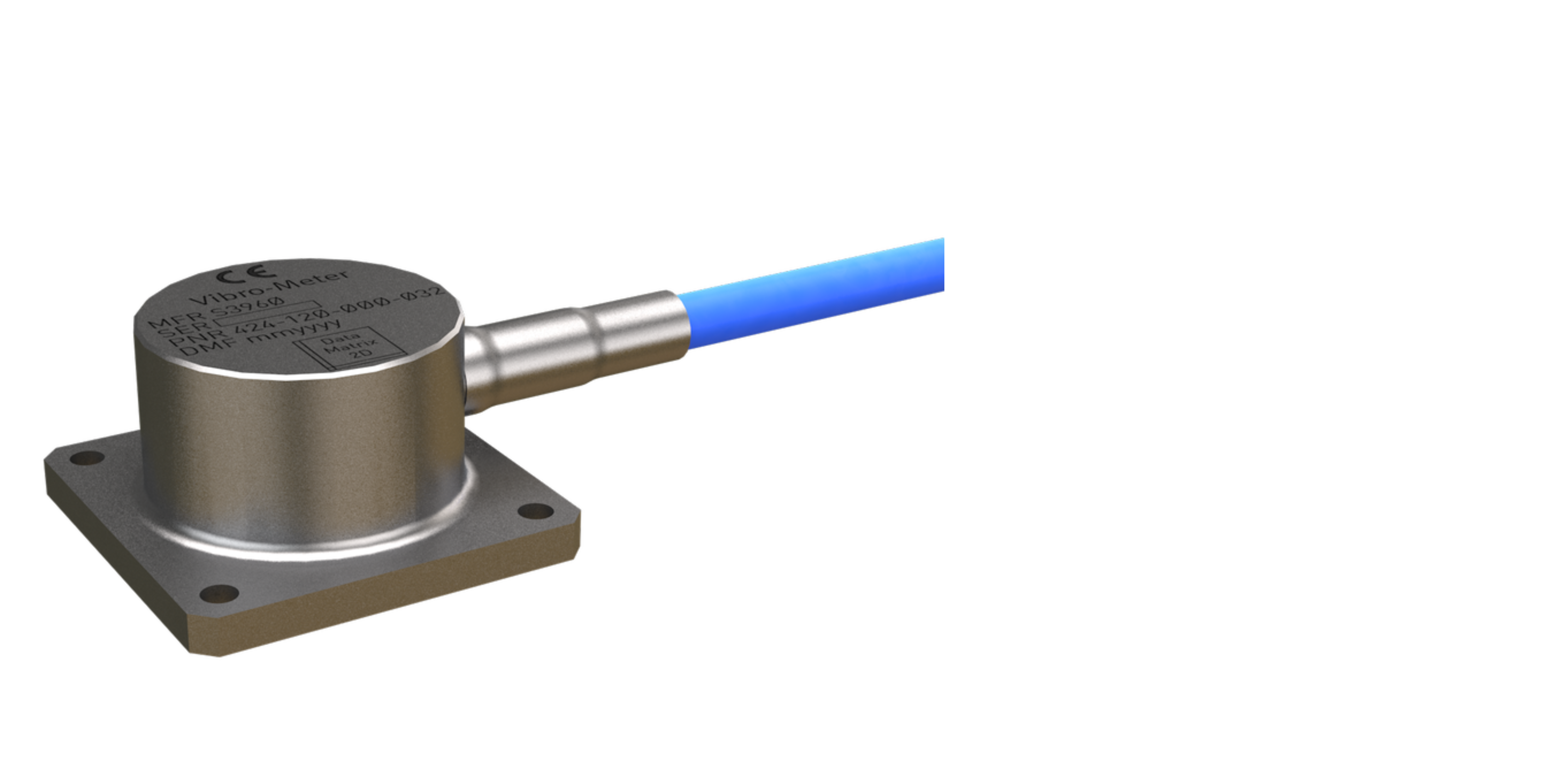 The vibrometer SE120 has a frequency response down to 0.2 Hz (12 cpm), an output sensitivity of 2mA/g, and uses piezo-resistive technology.

As we showed in part 1, when very low frequencies are involved, the output from a moving-coil sensor will almost always be stronger than from a sensor incorporating a piezo effect as its underlying measurement technology – whether piezo-electric (such as the vibrometer PV660) or piezo-resistive (such as the vibrometer SE120). If the decision was based solely on transducer sensitivity and the corresponding signal strength, a moving-coil device would thus be the obvious choice for low-speed measurements. However, moving-coil devices have a very fundamental, unavoidable limitation: moving parts and the corresponding degradation that occurs over time. 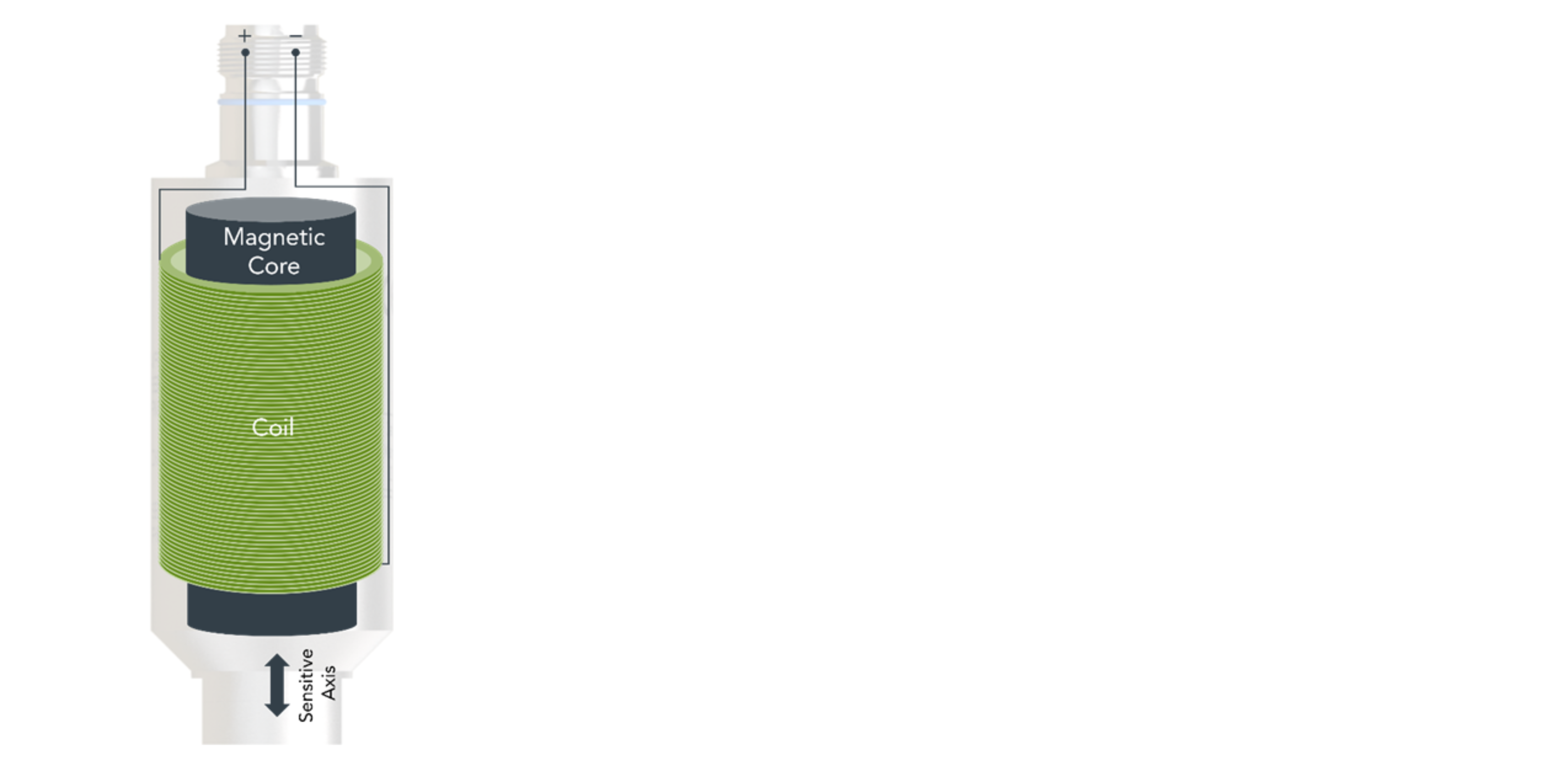 The vibrometer VE210 is an example of a moving-coil velocity sensor where relative motion between the magnetic core and a spring-supported coil generates a signal directly proportional to velocity. Because the device has moving parts, it is subject to wear over time – unlike solid-state devices that rely on a piezo-electric or piezo-resistive effect. Also, the construction of a moving-coil device limits its mounting orientations, unlike piezo devices that can be oriented in any direction.

Consider the vibrometer VE210 pictured above and conceptually showing its internal construction. The coil is supported by springs and is designed such that the coil remains nearly stationary as the case of the transducer and its rigidly attached magnetic core move up and down in unison. The relative motion between the magnet and coil generates a signal that is directly proportional to velocity. As can be imagined, however, when the transducer is mounted horizontally rather than vertically, the springs behave differently due to the direction in which gravity acts. Many moving-coil devices thus exhibit restrictions on their mounting orientation. However, the VE210 is designed such that it can be mounted in any orientation from 0-360°.

Over time, the springs supporting the coil will wear out and the transducer will fail – generally without any advance warning such as a gradually degrading signal. Of particular concern is so-called “cross-axis” vibration; i.e., vibration perpendicular to the transducer’s sensitive axis. This type of vibration can be especially fatiguing on the support springs and is characteristic of machines with passing vanes or blades such as gas turbines. Consequently, moving-coil devices are less reliable than piezo-effect devices and should generally be replaced every 3-5 years. It is not possible to inspect them for wear due to the (usually) hermetically-sealed construction.

In contrast, piezo-type devices rely on the alternating compression and tension of a piezo-electric crystal and the signal it generates proportional to force (and thus acceleration). There are no moving parts to wear out and such devices can last decades. When reliability is a concern and/or the device will be inaccessible for easy replacement, a piezo-type sensor may thus be a better choice. Although it may not generate an output signal that is as strong as a moving-coil device at low frequencies – because the acceleration levels may be appreciably smaller than the corresponding velocity levels – they will often be capable of generating a signal that is sufficiently strong for reliable monitoring and diagnostics. The vibrometer SE120 is an example of such a device and can monitor frequencies as low as 0.2 Hz (12 cpm). However, because it produces an acceleration output, the signal must be integrated to velocity units at the monitor. The vibrometer PV660 is another example. It provides internal integration and thus a velocity output. However, it is rated only to 1.9 Hz and thus not suitable for frequencies below 114 cpm.

Cost, frequency response, reliability, and signal strength are all considerations that factor into the decision of which transducer is best for a particular low-frequency application. 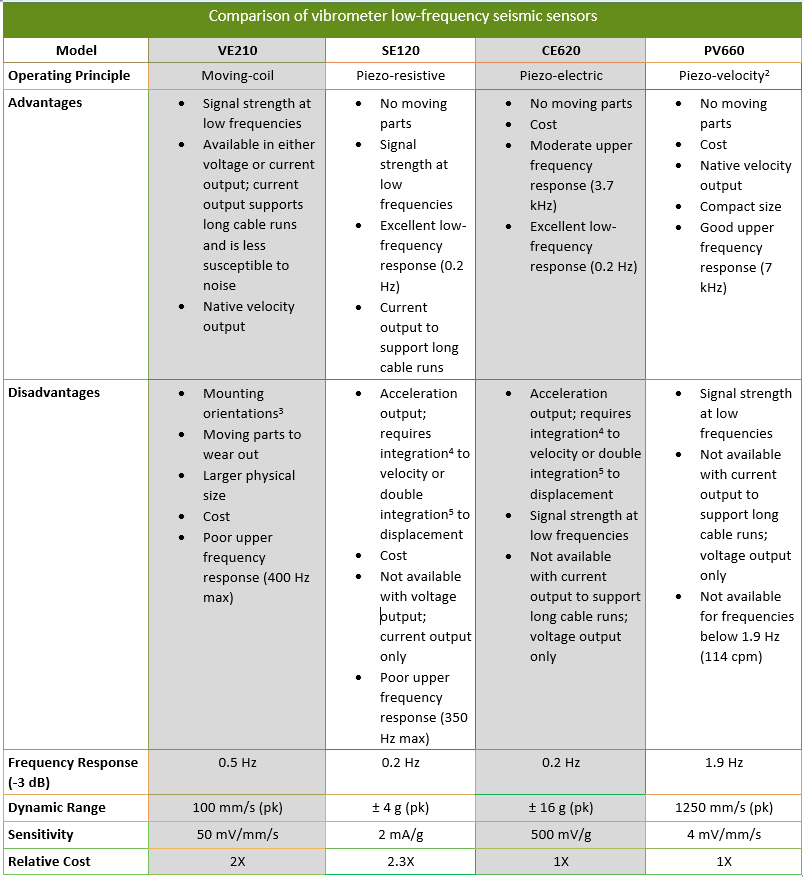 In instances where long cable runs must be supported (up to 1km or greater), a sensor with a current output should be selected. They are less susceptible to noise (which is inherently a voltage rather than current disturbance) and offer other advantages6. vibrometer models such as the VE210 and SE120 directly provide a current-mode signal modulation output to support long cable runs. Models with only a voltage-mode output can also be used, but require our IPC 707 signal conditioner to convert from voltage mode to current mode.

As we have shown, the selection criteria for casing vibration sensors on low-speed machinery such as hydro turbine generators has multiple facets. In part 1, we examined the physics of low frequency measurements and the many orders of magnitude that separates units of displacement, velocity, and acceleration when frequencies are below 1 Hz. Thus, when accelerometers are used, the sensitivity must be relatively high because the acceleration amplitudes are quite small at such low frequencies and the quality of the sensor must be quite high to ensure that its noise floor is suitably low and the high gain of the sensor does not simply amplify noise. In contrast, velocity sensors using a moving-coil design generally provide a very strong signal at low frequencies. In part 2, we continued the examination of selection criteria by showing that signal strength alone does not address all aspects that may be important for the application. Sensor reliability may often be of paramount concern along with secondary factors such as initial cost, broad frequency response rather than simply good low-frequency response, an output that may or may not require integration, and a signal output format that lends itself to very long cable runs.

For all of these reasons, vibro-meter is committed to offering a broad selection of low-frequency seismic sensors ranging from moving-coil designs to piezo-velocity designs to conventional piezo-electric accelerometers, and with the option for either voltage-mode signal transmission or current-mode signal transmission. You can explore the full range of these sensors in our catalog sections for vibration sensors with integrated electronics and velocity sensors. We also have the expertise to assist you in selecting the right sensor for your application. Use this page to find your nearest factory-direct sales and service office or vibro-meter representative office.

2A piezo-velocity device is inherently a piezo-electric accelerometer with an internal signal integration stage to produce an output in velocity units.

3Although the VE210 can be mounted in any orientation, this is not generally true of moving-coil devices from other manufacturers or for all vibro-meter moving coil devices. For example, the vibro-meter CV213 is restricted to ±100° of vertical.

6You can read more in vibro-meter Application Note "Cable length and attenuation in frequency for vibration measuring chains".